We said goodbye to Isabella von Holstein at the end of May, as she left for a new post in Germany. Having completed her doctorate, she will now be continuing her stable isotope research at the Institut für Ur- und Frühgeschichte (Prähistorische und Historische Archäologie) at the University of Kiel. It was sad to see her go, but she expects her studies to bring her back to York on a regular basis and we hope to see further collaboration in the future. During her four years of part-time work at The Anglo-Saxon Laboratory, Isabella has constructed a database of dye results from twenty years of consultancy reports on art-market textiles, contributed texts on individual textiles (such as the garment parts stuffed into a pillow from the St Helena cemetery, see Bibliography) and worked through an assessment of one of our late medieval textile collections. As her last act, she presented me with a bound copy of her doctoral thesis (see below, Christmas Honours). Call me biased, but I reckon this to be one of the best I have read in recent years. It is both a testament to her own hard work and an indication of the high standard maintained at the University of York’s BioArCh department.

Things our grandmothers never dreamed of

There was much hilarity in the classroom at the University  of Copenhagen where I was lecturing last week, when someone went to press the  button for dimming the lights and the windows started opening and shutting. The  university's Centre for Textile Research has wonderful new bespoke premises,  with all the smart gizmos you could possibly wish for, although you may need a  manual for the light switch. The lecture was given from our office here in  York, using the Skype share-screen facility, which meant that I could do a  Powerpoint presentation and interact with the students during question time  (organised by Luise Ørsted Brandt). Afterwards, while the students were doing  practical experiments, Eva Andersson Strand took me on a tour of the new premises with her iPad. The building is light and airy, with a lecture room, workrooms, offices and enough kitchen space to allow hands-on dye work.  It was good to meet the director, Marie-Louise Nosch, and to say hello to Ulla  Mannering, editor of Archaeological Textiles Review. I did not quite get to shake hands, but given a few more years I am sure somebody will figure that out.

The lecture was ‘Colouring clothing: the cultural significance of dyes and pigmentation in Viking-Age and medieval communities of the North Atlantic’ and was part of the course on North Atlantic and Scandinavian costumes. For further information on CTR, their courses and publications go to http://ctr.hum.ku.dk/about/

On Thursday, Isabella took a break from peering at old textiles to go and look at a new one. For those who do not know, the Battle of Fulford, in which the northern earls were defeated by Harald Hardrada, took place on the outskirts of York, five days before the Battle of Stamford Bridge and less than a month before Hastings. Even locally this historic event is not well known. Chas Jones, however, decided to change that. He asked the question, what if there had been a wall hanging to record the event in the way that the Bayeux ‘tapestry’ (really an embroidered hanging) recorded the Battle of Hastings? With a small group of able needlewomen, he set about putting the record straight. The result is a delightful and witty recreation of a Bayeux-like hanging, all done in natural materials, the embroidery yarns coloured with authentic Anglo-Saxon dyes. The ‘Battle of Fulford’ was briefly on show last week at the York branch of Barclays Bank and funds are now being sought for a stand to allow it to be put on permanent display. Meanwhile, you can take a look at the website, www.fulfordtapestry.info 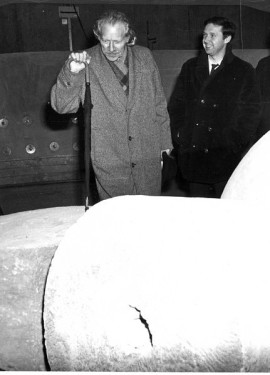 You know you are getting old when your rambling anecdotes become ‘oral history’. York Minster is currently preparing an exhibition on the years in which the area under the central tower was excavated, 1967-72. Since I was the finds officer there in the latter half of this time, I seem to have become part of the story, along with the artefacts I helped to record. This got me searching through old photo albums, where I came upon a picture of our chairman, Sir Mortimer (Rik) Wheeler, sharing a joke with the director, Derek Phillips, over a fallen Roman column. We had to work long hours, but the craic was good. The excavation went on for several years afterwards: I wonder if they are planning a sequel? The exhibition opens to the public on May 25.

The new year got off to a good start with a two-day seminar on 4 and 5 January in Lund (Sweden). At the invitation of Johan Callmer, Mats Roslund and Søren Sindbæk, I attended via Skype and found myself delivering a talk to more professors than you can usually shake a stick at. I was reprising an earlier lecture on a comparison between the predominantly male metal-working industry and the female-dominated textile crafts. On this occasion, the same material was offered as a resource for the study of trade and migration in the Viking Age. It has become clear during the course of the CNVT project that it is necessary to separate the crafts for close analysis and then put them back together again, in order to understand the dynamics of exchange between the British Isles and Scandinavia. The standard of the other presentations was extremely high, as you would expect, and the contributions from the eastern Baltic particularly stimulating. Having started the seminar feeling rather jaded after a full-on holiday season, I finished it re-energised and ready for the fray.

Isabella has just completed a superb PhD at the University of York on A light stable isotope approach to identifying movement of medieval textiles in North West Europe. Penelope was external advisor on her doctorate and Isabella has been working as a volunteer one afternoon per week at ASLab throughout her time in York. More on her achievements later.

Matt has also successfully completed an MA in Ancient History at University College London (at last, someone to talk Greek to!). He is working as Penelope’s PA while he decides where his academic career will take him next. Meanwhile, the ASLab accounts are up to date, files are in order and a catalogue of the contents of our bookcases is in progress (six down, eight to go). Every office should have one.