The Anglo-Saxon Laboratory and Textile Research 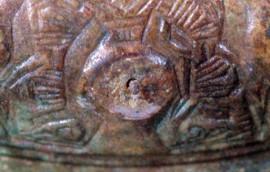 The Textile Research business was established in 1980 as a service to museums and archaeologists in the field of textiles, clothing, animal pelts and dyes. Within five years it had acquired 250 clients on five continents and a customer list that included many of the major museums of Europe and North America. For further details of the Textile Research service, click on Textile Research

Staff at The Anglo-Saxon Laboratory include Penelope Walton Rogers (manager/proprietor), two part-time employees and sundry volunteers and post-graduate students. There is also an established team of external consultants, who contribute from their specialisms as the need arises.

Penelope Walton Rogers was born in 1950 in the West End of Newcastle. A government-sponsored scholarship took her to a girls' public school, but at the age of 17 she gave up a place at Girton College Cambridge and went to work in field archaeology. Her first publication, on pottery, appeared in 1971 while she was Finds Officer with York Minster Archaeologists and since that time she has produced catalogues, reports and research papers on a range of artefacts of different periods and materials. In 1980 she set up Textile Research, an independent unit specialising in textiles and costume. In this capacity she has been author of three books and over 150 reports, published in Britain and abroad (Bibliography). She is also an experienced academic editor and has brought to publication two volumes of conference papers and nine issues of the journal, Dyes in History and Archaeology. In 2001 she established a new business, The Anglo-Saxon Laboratory, which provides archaeologists with reports on early medieval sites and artefacts of all types (Home). She is a Fellow of the Society of Antiquaries, qualified in accountancy and trained in business management. She is currently Honorary Visiting Fellow at the University of York and Chair of the Early Textiles Study Group.

Penelope is an experienced project manager and has brought to successful conclusion projects on behalf of English Heritage, commercial archaeological organisations and local-government units. She also acts as external supervisor/advisor on post-graduate research at a number of universities. For more information email pwr@aslab.co.uk

Two late 9th-century ‘tortoise’ brooches from the burial of a Norwegian woman at Adwick-le-Street near Doncaster, South Yorkshire (excavated by Northern Archaeological Associates on behalf of Yorkshire Water Ltd). Brooches of this type were copied and re-copied throughout the Viking world and the motifs seen here are only distant echoes of the original animals with pointed ears and gripping paws (far left). The brooches are a non-matching pair found on the woman’s shoulders. They would have been used to fasten the distinctive shoulder-strap dress which was worn by Viking women until the mid10th century. Photo: Erica Paterson, YAT, on behalf of NAA.